Home / Blog/11 Tourist Places to Visit in Ahmedabad that You Shouldn’t Miss! 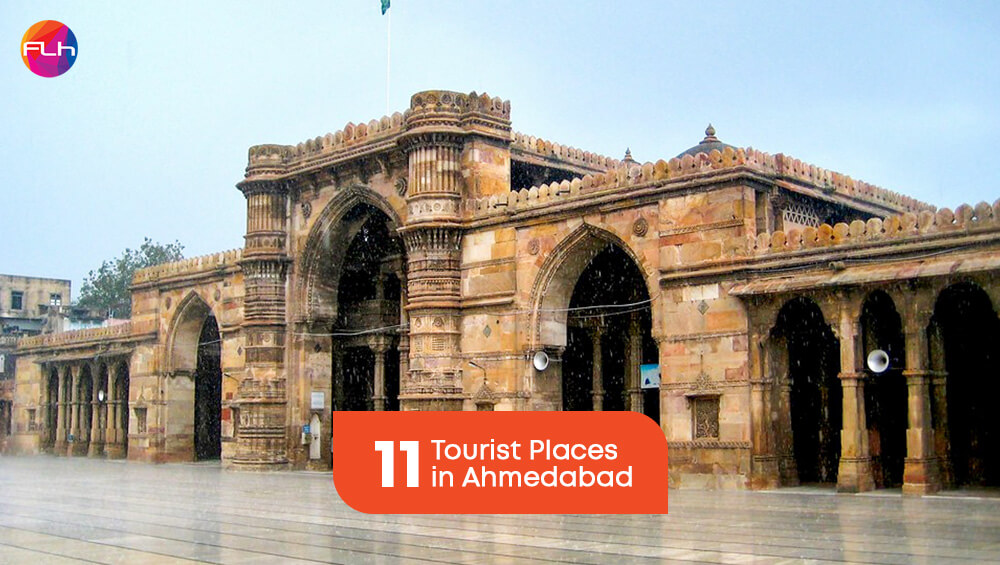 Ahmedabad has tons of tourist spots that people prefer visiting every year and a few of them are as famous as the Statue of Liberty. Having said that, Gandhi Ashram, Akshardham Temple, and Sidi Saiyed Mosque have acquired maximum popularity among tourists in Ahmedabad. There are also other famous places to visit in ahmedabad that you should not miss exploring if you’ve set your foot in Ahmedabad.

This blog will virtually take you through all the magnanimous places that Ahmedabad has to offer to its tourists and by the end of it, you will surely be convinced to visit them.

The Swaminarayan Temple is one of Ahmedabad’s most popular religious sites. This marvellous temple is devoted entirely to Lord Nara Narayanan and is the Swaminarayan sect’s first temple. The image of Lord Narayanan is made of pure marble. It is located in the Kalupur area of Ahmedabad and the best part about it is that there is no entry fee and you can visit at any time of the year.

This is one of Ahmedabad’s most popular tourist destinations, located on the banks of the Sabarmati River. Once Mahatma Gandhi’s home, it is now one of Ahmedabad’s best Ashrams. The most interesting part is the Museum section, which displays the Mahatma’s personal belongings as well as several of his letters. The Upasana Mandir, Magan Niwas, Hriday Kunj, Udyog Mandir, and the Ashram Museum are some of the main attractions here. Visitors can still see Mahatma Gandhi’s personal belongings, such as his round glasses, wooden slippers, hand-operated chakra, and other personal mementoes.

Shri Pranlal Bhogilal founded the Auto World Vintage Car Museum in 1927. This Museum has over 100 exclusive vintage cars on display. Each is the pinnacle of luxury brands such as Bentley, Jaguar, Rolls Royce, Maybach, Austin, Chrysler, Cadillacs, and many more. The most intriguing and unique aspect is that each of these cars is custom-made to the buyer’s specifications. the entry fee per person is minimal and so, you can take as many people as you want.

Jhulta Minar is one of the world’s most unusual structures. Featuring a fascinating architectural style. When one of the minarets is shaken, the other corresponding minarets begin to vibrate after a few seconds, but there are no vibrations in the area between the Minars. The Minars also have exquisite architectural splendour, reflecting Mughal and Rajputana styles. The Minars were supposed to serve as the entrance to the Sidi Bashir mosque, but they were destroyed during the Gujarat Sultanate uprising. Add this one-of-a-kind structure to your list of places to visit in Ahmedabad to learn more about it.

Kankaria Lake was previously known as Hauz-E-Qutub and was used as a bathing area for the sultans of the time. It now has a lovely island garden in the centre, as well as a magnificent summer palace known as Nagina Wadi. Here, you can also participate in activities such as toy train rides, tethered balloon rides, kid’s city, and boat rides. The area around the lake is ideal for a relaxing evening stroll. There are also other activities available, such as archery, gymnastics, and water rides. The entry fee is Rs 5 for children below 12yrs and Rs10 for children above 12yrs.

The Sabarmati Riverfront is a lovely waterfront area on the Sabarmati River’s banks. It has been developed very artistically, making this area one of Ahmedabad’s most enchanting tourist destinations. On the banks of the Sabarmati River, this is a beautifully developed area. The project includes two levels of developed areas, the lower level for pedestrians and cyclists and the upper level for parks, plazas, social and cultural event venues, and so on. It’s a great spot for a family picnic. The Riverfront is also ideal for a leisurely evening stroll or a boat ride down the river

The Jama Masjid in Ahmedabad is one of the city’s most popular attractions. In 1423 AD, Ahmed Shah I, the founder of Ahmedabad, built the mosque. The building is a magnificent fusion of Hindu, Muslim, and Jain architecture. The mosque is made of Yellowstone and has 260 pillars, each with intricate carvings. Because of its architectural splendour and history, the Jama Masjid is one of the most interesting places to visit in Ahmedabad.

The Adalaj Step Well is an architectural marvel that combines Hindu, Jain, and Islamic designs. The Step Well is five storeys below ground, with three sets of stairs leading down to the first floor. Intricate carvings, beautiful sculptures, and images of Jain and Hindu deities adorn the entire structure. There are also carvings depicting everyday life in the area, such as women churning butter.

Swaminarayan Akshardham Temple is a lovely shrine to Lord Narayan. It is the perfect example of Indian architecture from the nineteenth century. The day after Diwali, people from all over the country and abroad come to seek blessing from this magnanimous temple. This Temple is one of the most popular tourist attractions in Ahmedabad. The intricate carvings within the Temple grounds showcase the artisans’ artistic craftsmanship. Swami Narayan’s artefacts have also been preserved by the Temple. If you visit the Swaminarayan Akshardham Temple, do not miss the morning Aarti to witness one of the most enthralling rituals of all time.

Sidi Saiyyed Mosque, built-in 1573, is one of Ahmedabad’s most popular tourist attractions. The highlight of this mosque is its stone slabs, which are shaped like intertwined trees and foliage. Sidi Saiyyed Mosque is popular among photographers and history buffs due to its aesthetic appeal and historical significance. It was built by Sidi Saiyyed, one of the last few structures built during the reign of the Delhi Sultanate.

Zen Garden, Ahmedabad’s Japanese Zen garden where visitors can find the same tranquillity, poise, and serenity found in yoga over the centuries. It is located in Ahmedabad’s Textile Industry’s Research Association (ATIRA). The Zen Garden represents wind and water, the two elements that connect the Earth and the sky and aims to demonstrate various aspects of Japanese art, culture, environment, and architecture. In both civilizations, the emphasis has been placed on inner peace as well as external advancement and expansion. Its purpose is to strengthen the Indo-Japanese friendship for greater stability and development.

We hope we were able to keep our promise and take you virtually through all these landmarks of Ahmedabad.  If you are someone who living as a PG in ahmedabad, you must explore this beautiful city and  its hearty people. Happy travelling!


Are You a Hostelite? Know 5 Tips for Effective Time Management